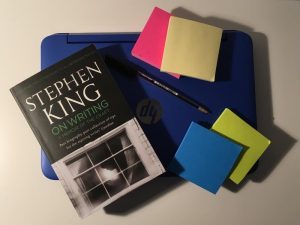 I have always read
A lot. I love stories. As soon as I learned to read, and that words put together were like magical doorways into different worlds, I was off.

Books affected me. Stories impacted me. Fictional characters took a firm place in my heart and memory. I often preferred them to real life people, trapped as they were on the printed page. A safe place I could shut, re-visit, take a break from, or imagine a different outcome for.

I have always written
I scrawled my own little books, complete with sketches, from an early age. I stapled them together, numbered the pages, laboured over the covers. For my tenth birthday I got a typewriter. I tapped away.

I have a head that lives firmly ‘in the clouds’
At school I was a dreamer. I was frustrating for my teachers. I was bright enough, and in the top sets, but I often looked like I was not paying attention, and I wasn’t. Instead, I could be found staring out the window. My brain was never where it ought to be – I have literally no recollection of geographical rock formations, German vowels, or how to divide Pi (is that even a thing?) – but, the grey matter was actually pretty busy, thinking and thinking. What if this was a thing? Why did so and so do this? What if they hadn’t? What if that had happened instead? Or that? Or this?

As it was clear I was never going to focus academically, I was generously labelled as ‘creative’ instead. I took this seriously and I went to the BRIT School when I was fourteen. It’s an amazing place, the only non-fee paying performing arts in the UK. I saw it on Newsround. It said it was Croydon’s answer to Fame, and BRIT was a good time. I didn’t have to wear a uniform, we could call teachers by their first names, and I was surrounded by really talented actors, singers, dancers, and media heads. I learned about devising theatre. I learned about character and story. I wrote plays. 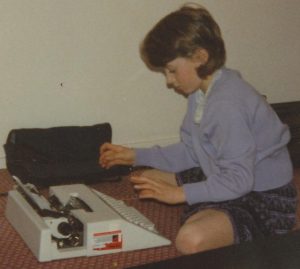 But, I was still a dreamer, and I had other things going on outside of school. I left with only two respectable GCSEs, a B-Tech, and no A levels.

After BRIT, I found myself lost for many reasons. It was an odd time, a time of no-fixed-abode and a fair amount of fear. I was always on the move, with a rucksack full of books on my back, and army boots on my feet. I was headed down a bad path.

I couldn’t verbalise any of it, and I wouldn’t have known who to talk to anyway. I wrote it all down. In snatches, in various notepads in disjointed sentences and paragraphs. Writing, as always, was a salve. A way of making sense of the world.

At 21, I got a place at Kingston University despite the odds, and turned things around. I was to study Drama and I wanted to combine it with Psychology. The kind lecturer, who gave me a chance when he needn’t have, suggested English Literature instead. I’m glad he did.

I took a module in Creative Writing. It’s the only thing I got a first in. It was the first time in a classroom, that I wasn’t looking out the window, thinking of something else.

My tutor was a published writer. He loved everything I wrote and suggested sending it out.

I didn’t. I was not a ‘finisher’ at that age, and maybe didn’t have enough life behind me to make full, convincing stories or characters yet anyway.

But, I continued to jot things down; thoughts, page-long stories, random chapters, awful melodramatic poems, and lyrics, notes to myself scrawled on the back of beer mats when I’d drunk too much.

I graduated, travelled a bit, and became a mum at 25. I stayed home with my son for a few years. I still read. I still wrote. I worked part-time at my local radio station, scripting the travel news. I got a bursary from the Journalism Diversity Fund to study for an MA in Journalism. I was a single parent by now. I graduated and worked in PR.

I met the man who would become my husband.

We moved to a new town, I became pregnant with my second son. My husband said maternity leave would be the perfect time to try writing that book I was always saying ‘one day’ about.

Madison Attallee
I entered a writing competition with a shockingly-bad, unfinished, largely unedited piece of plotless frivolity. I had left it too late, but I was determined to make the deadline which was the end of 2014.

As I said, it was a BAD piece of prose. However, I quite liked the woman, Madison Attallee, whom I’d spewed onto the pages. I wrote more of her and, over the space of about four months, I had a folder full of beginnings featuring Madison. And bugger-all else.

Seven months pregnant, tearful, with never more than 15,000 words, I sobbed to my husband that I just couldn’t do a whole book. He, generally supportive, reasonably mild-mannered, shouted that if I didn’t finish it I’d never know, and added that I was terrible in an office and he’d likely sack me if I worked for him (true story, I was still staring out the window).

Despite the stupidity of, any man, shouting at their heavily pregnant, terribly hormonal wife, it shifted something. If ever I’d needed a kick-up-the-arse, I guess it was then. I stayed up that night and re-read George Orwell”s essay ‘Politics in the English Language’  (one of the best things I’ve read about ‘how to’ write) and which I still have in my Norton Anthology (hi to all the English-Lit students out there) and  Stephen King’s ‘On Writing’.

Some days I managed an hour before my eldest son got up in the morning, sometimes that would be 500 words, or maybe even 1,000. Some days I would drop him at school, come home and carry on. On really, really, good days I’d get down a few thousand words. On even better days, they were whole, complete sentences that made sense. 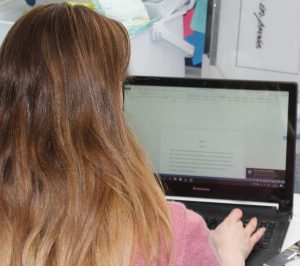 The new baby came along. I wrote when he napped. I wrote when he was cooing at my feet. I wrote deprived of sleep at two in the morning. Each day, I wrote something. I learned that, for me, the first draft must be non-stop. If I took a day off it was harder to start again. Now I know that I can pause during editing and re-writes but not in the first draft. Not after 20,000 words. Once I hit that mark I’m in.

I Googled a lot of blogs, and articles. I learned that writers seem to all have different processes, that there is no right and wrong. Just whatever works for you. Like life. I also learned that I enjoyed it. Immensely. I like making stuff up. I like the realm of possibilities. I like thinking about how someone other than me might react. I like not knowing what will happen next, and surprising myself when it seems to come together.

I learned that when I was there, fingers flying over the keyboard, I wasn’t staring out of the window.

The crappy first draft
Yeah, it was quite bad. But not utterly awful. The characters were there in a raw form, the plot was pretty holey. By now though, I was determined. I was still reading a lot of blogs by authors. I was spending more time on Twitter. I have always been an avid re-reader, and now I was beginning to look at my favourite novels more critically. Why did I like them? What was it about the characters? How did the plot come together? Was there anything I didn’t like? And why?

I read an article in Mslexia by the crime writer Sarah Hilary (whose series features one of the best female protagonists ever written) about getting published being hard work rather than simple luck. This gave me hope. I emailed her and was stunned when she replied. She didn’t plot as such, which made me feel less panicky about the fact that I just couldn’t seem to. She said, in her article, that the work was in the re-writing. This gave me hope (advice from an actual real life author ) and the impetus to keep going. I re-wrote the whole damn book. Then again. Then I sent it to a friend (the same one I’d dragged to CrimeFest). She liked it.

During one re-write, maybe the third, I realised I was losing track of things like; characters, what happened five chapters ago, what day of the week it was. I bought a massive noticeboard, a load of pins and I made colour coded Post-it notes for each chapter. I now do this for every book. I have dabbled in Excel since, but the boards work best for me. I like the visual. I like the way they look when they’re done. I like being able to move the little notes around, re-write, or bin them.

This made the next re-write a lot easier, and I felt absolutely gleeful that me, admin-phobic-me, had managed such organisation.

I saw a post on Sarah Hilary’s social media about a short, online crime writing course and emailed her about it (yes, she genuinely has been this generous with time and advice to a ‘fan’ and aspiring writer that she didn’t know). The course was run by Tom Bromley at The Professional Writing Academy. It was affordable and really useful for several reasons; it made sure I was focusing, it made me write bits and bobs that ultimately did not go into the book, but helped me get to know my characters, and – gulp – it taught me I could take constructive feedback. It was a privilege to read the fantastic work of others in the same position as me, and perhaps most importantly it kept me moving towards that goal of the book being complete.

But… when is a book finished? I’m still not entirely sure. Now I go by ‘when my editor says so’ (read my story to publication here). Then I was feeling out blind.

I eventually got to the point where it was as good as I could make it on my own. So that’s when I stopped, and I typed the wonderful words ‘The end.’