I’ve been interviewing authors who write female-led crime series, and next is Victoria Selman who writes the Ziba MacKenzie series, which starts with Blood For Blood (published by Thomas & Mercer on 1st February 2019).

Niki Mackay: Did you consciously decide to write a female led series?
Victoria Selman: No! The first draft of Blood For Blood actually centred on a male protagonist, ex-SBS [Special Boat Service] Jack Wolfe, a crime reporter with The Daily Telegraph. I was advised that a female voice would be more authentic. Trouble is, by then I’d already fallen in love with ‘Wolfie’. After some agonising, I came up with a solution: criminal profiler, Ziba MacKenzie – ex-Special Reconnaissance Regiment rather than SBS since it’s the only Special Forces branch that accepts women operatives. And so I didn’t have to lose Jack, I kept him in as her love interest.

NM: If so, why?
VS: When I started writing Ziba, I found how much more easily she slipped through my fingers than when I was using a man’s voice. At the time, I chose to write a female-led series because I thought it would be more authentic than trying to write as a male. Now I’m extra pleased I did. In the aftermath of #MeToo, I think it’s more important than ever to create female characters that don’t take rubbish from their male counter parts. Ziba can incapacitate a guy twice her size with a double palm strike through the centre line. She doesn’t take crap from anyone.

NM: How did the idea for your protagonist’s background come to you?
VS: Profiling is something that has fascinated me for a long time; the idea you can understand a person from their behaviour and predict their future actions. The Special Forces intrigues me as well. Operatives are chosen for their physical toughness and mental capacities. But that doesn’t mean they’ve got it together emotionally or in their personal lives. I wanted to create a character who had those contrasting elements – tough on the outside, soft in the middle. An expert in human behaviour who really doesn’t get people.

NM: What series, if any, did you read before you wrote yours?
VS: So many! I love reading, crime fiction especially. I adore Thomas Harris, the guy’s a genius. Lee Child too – Reacher, what a brilliant character! The first crime series I ever read though was Sherlock Holmes. Perhaps that’s what inspired Ziba’s deductive side…

NM: Did they inform your work?
VS: I think everything we read informs our work to some extent. It’s why to write you need to read.

NM: What are you currently reading?
VS: Well obviously I loved ‘I, Witness’ (I can’t wait for the next in the series) and I’ve just finished Elle Croft’s ‘The Other Sister’, which kept me guessing all the way through. Niki and Elle record Crime Girl Gang with me, a true crime podcast where we examine cold cases then solve them from a fictional perspective. I just love the twisted way they think!

NM: What are you currently working on?
VS: I’ve just signed Book 3 in the Ziba MacKenzie series. Think Silence of the Lambs meets Mindhunter. I’m very excited! 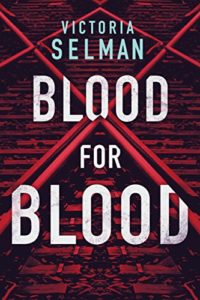 Victoria co-hosts the podcast, CRIME GIRL GANG in which three crime writers examine real life cold cases then solve them from a fictional perspective. Her first novel, BLOOD FOR BLOOD was shortlisted for the 2017 Debut Dagger Award and is a Kindle #1 bestseller. She has also written for The Daily Express and Ham & High newspapers and in 2013 she won the Full Stop Short Story Prize. For more information or for sneak previews and giveaways visit: www.VictoriaSelmanAuthor.com or follow her on Twitter @VictoriaSelman.