You are here: Home / Reading / My top 4 female-led crime series

‘I, Witness’ is the first in a series featuring PI Madison Attallee. It is no mistake that when I sat down (finally) to write that novel I’d been talking about for years I came up with a character like her. I like complex, outspoken women; my heroes growing up were Tank Girl, Madonna and Courtney Love to name a few. In terms of books crime is my go-to genre. I read a lot, and over the years I’ve gone through all the different ‘types’ of crime novels. I love them all; the serial killer thrillers, psychological suspense, domestic noir, legal dramas, action, and more (isn’t one of the best things about this genre it’s diversity).

But I do so love a good series, and I do love a girl I can get along with. I like being invested in character. I can be pathologically anti-social (in phases, not all the time) and when I’m feeling that way, re-visiting characters I’ve spent time getting to know is a real salve. I’m sure it’s the same for all the readers waiting for the ‘next one’ or revisiting past favs. Now, I like a lot of series, not just ones where women rule the roost, and not just the ones listed below – this post was insanely difficult to narrow down and could have turned into a book in its own right – but in honour of Madison (and time and space limitations) I’m sticking to my top four female heroines. I’ve listed them in the order I discovered them. 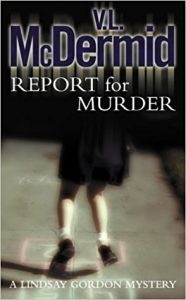 When I was a child, my mum and her partner had an impressive collection of Women’s Press titles. Back in the day (80s & 90s – I’m not THAT old), they would be purchased at The Silver Moon Bookshop – which was a favoured day out for me – read and popped on the shelf. The books were a point of pride in our house. Those shelves of black and white spines with an iron on the side looked awesome. I’m sad to say after various moves, only a few have remained (mine now). But it was this collection where my love of real crime fiction was ignited. I stumbled upon Lindsay Gordon, journalist turned sleuth, and I was totally hooked. 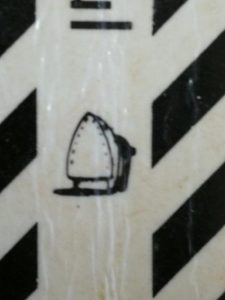 The first case ‘Report For Murder’ finds Lindsay being forced, through financial circumstance, to report on a fundraiser at a girls boarding school. Lindsay isn’t thrilled at the prospect but when one of the students dies dramatically on stage (yup), Lindsay ends up investigating a murder instead. This was an instant upgrade for me from Nancy Drew and I was reading these books in the 90s so there were a few for me to get through. Whilst I’ve gone on to read many more McDermid’s the Lindsay books remain a fav as they set me off on a whole new reading path, and I’ve never looked back! 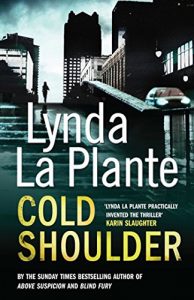 The first book in this series ‘Cold Shoulder’ is a frighteningly realistic account of active alcoholism and struck a chord with me on so many levels. We meet Lorraine at the pinnacle of her downfall, her life is falling apart around her. She is a complicated, harsh, very unwell woman who does despicable things, and yet by the end of book one I was totally rooting for her.

I re-read at least one book from this series every year. The cast of characters is wonderful. Lorraine – the cop turned PI – ends up heading an unlikely team of misfits, which include former boss Bill Rooney, and compulsive overeater Rosie. The interplay that develops between the characters is marvellous, and beautifully told. La Plante brings people to life so well and Lorraine’s journey is compelling.

Set in the USA and featuring not just Lorraine’s fall from grace but also her all too human recovery from it, this is my favourite series by La Plante (I love them all though). 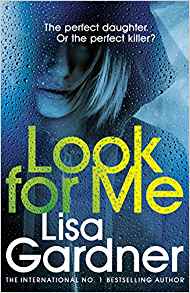 I’m a massive fan of the American Crime Writers. I like Karyn Slaughter’s Will Trent series, and Michael Connelly’s Harry Bosch holds a special place both on the page and the screen but, as I said, I’m leaving out the fellas today. My favourite stateside born heroine (there is another American written by a Brit on this list) is DD Warren. She’s tough, beautifully dressed (cannot go wrong with a leather jacket and heels) and doesn’t play well with others. Gardner is an absolute master of suspense, and the cases DD investigates are always complex, twisty and intriguing. I’m happy to say the new DD Warren ‘Look for Me’ is on my TBR pile and this is one of the series that I look forward to with each new release. 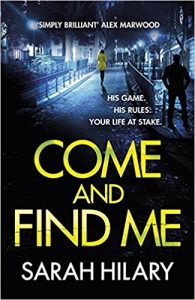 I cannot recommend these books highly enough. They are full of depth, astute observation, and all are beautifully written. The first in the series, ‘Someone Else’s Skin’ is not just a clever police procedural but also a thoughtful look at domestic violence. It sets the tone for the books to come: intelligent crime fiction with a lot of heart. The main protagonist, Marnie Rome is layered, complicated, but also brave. She has a terrible back-story but as each book progresses she softens somewhat, not allowing herself to become crippled by her traumatic past.

She has a great sidekick in the form of Noah, whom Hilary heaps a brutal amount of physical punishment on at times. They make a great team that I look forward to re-visiting with each new release. The latest in this series ‘Come and Find Me’ is out now. I would also challenge anyone to get through the prologue of book two without shedding a tear.

So, I find myself having just handed in the second book in my series, and less than a month away from publication of book one ‘I, Witness’. My leading lady Madison is a grumpy fucker but her heart’s in the right place. I hope you enjoy reading her as much as I enjoy writing her!