You are here: Home / Reading / Review of ‘Dancing on the Grave’ by Zoë Sharp 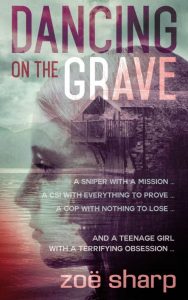 A sniper with a mission…
a young cop with nothing to lose…
a CSI with everything to prove…
a teenage girl with a terrifying obsession…
There’s a killer on the loose in the Lake District, and the calm of an English summer is shattered.
For newly qualified crime-scene investigator, Grace McColl, it’s both the start of a nightmare and the chance to prove herself after a mistake that cost a life.
For Detective Constable Nick Weston–recently transferred from London–it’s an opportunity to recover his nerve after a disastrous undercover operation that left him for dead.
And for a lonely, loveless teenage girl it’s the start of a twisted fantasy–one she never dreamed might come true.

This story, interestingly, starts with an animal death rather than a human one. A local VIP’s dog no-less and this unusual crime is a catalyst straight into the action.

We meet Grace, a diligent CSI collecting evidence, then Detective Nick Weston. They realise early on that the weapon used ought not to have been available and both are determined to get to the bottom of it. A jagged tale of secrets and suspicion builds from this point. They are hindered by the powers-that-be but start to get taken more seriously when someone starts shooting and killing people, and it becomes apparent that the killer is a highly trained sniper.

‘Dancing on the Grave’

is a pacey, well-plotted crime novel with all the twists and red-herrings you would expect from the genre. It has an almost old-fashioned feel to it, and yet everything has a contemporary spin. I think this is achieved not just by the very current issue of shooter crimes, but also by Zoë Sharp’s obvious insight into human psychology and her exploration of themes such as PTSD, loneliness, neglect, and eating disorders.

I read books largely for their characters and this is what kept me turning the pages with this one (I read it in one night) and also what puts it a cut above your usual. I loved Nick and Grace but the heartbeat of the story for me was Edith. A teenage girl suffering various mental tortures and a lack of kindness from those around her. She was sensitively written and fully-rounded. You find yourself at times rooting for her and at others wanting to tell her off.

I have long been a fan of the Charlie Fox

series, and this shares similarities in that you get the excellent, clean, uncluttered prose you expect from Sharp, but it’s also a different kind of book. A fresh take on the police procedural with a lot of keen observations. ‘Dancing on the Grave’

is being billed as a stand-alone but actually, I’m hoping that Sharp may consider making a series from it. Nick Weston and Grace McColl are immediately relatable characters and Sharp writes a lovely, sometimes fun, sometimes frustrating interplay between them which I would love to see expanded in more books.

I highly recommend this. If you’re off on your holidays it’s the perfect, action-packed page-turner.