You are here: Home / Reading / Review of Rattle by Fiona Cummins 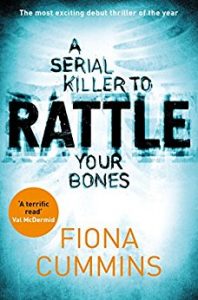 is part classic serial killer thriller, and part psychological thriller. It also explores, marriage, pressure, children with illness, and the impact this might have on families.

I loved it. Some of the reviews said it’s an upsetting read so I went into this book expecting graphic violence and there isn’t any. Lots of unsettling things are implied but I didn’t find it at all gratuitous. It’s creepy and deals with some hard-hitting criminality, but it’s a crime book, so I expected this.

The most disturbing portions of the book, for me, were from the children’s point of view. But they were cleverly and believably written. These sections were more than a little sad, but again, nothing that would have turned me away and vital to the story line. The Bone Collector was a thoughtfully portrayed and well-rounded villain. His back-story unfolds as the book goes on and you can piece together the ‘whys’ inherent in his madness. This is always a must for me in a crime novel. I often find the why-done-it almost as important as the-who-done it: Cummins does this really well.

Actually, all of the characters are well-written and fully fleshed out. Erdman is at once a bit sad, and instantly likeable. He is a man on the edge when we meet him, and gets pushed further and further as we go on. I was rolling my eyes at him at moments but rooting for him at the end. We spend the majority of the book with Erdman, Etta, and the children Clara and Jake.

I liked the detective, Etta Fitzroy and her issues – around child bearing, marriage and family – which tied in with the books’ wider themes. I wouldn’t mind hearing more from Etta and I’m wondering if there may be a series at some point.

All-in all-this is a great book, full of beautiful, sparkling prose, and a fair amount of hope too.