You are here: Home / Reading / Review of ‘Scapegoat’ by Adam Howe & James Newman 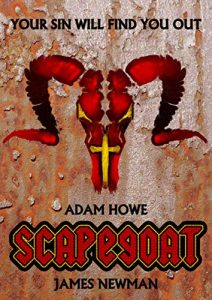 This is literally the most fun book I’ve read for ages. Mike, Lonnie, and Pork Chop embark on a road trip accompanied by Cindi the bar girl. It starts to go seriously wrong after a drug and booze fuelled episode which finds them lost. When they run over a naked woman whose been beaten-up and has the seven deadly sins carved into her skin, things go from bad to worse – they encounter an insane religious cult and all hell breaks loose.

The characters in Scapegoat are fun for sure. But they are also fully realised, and I enjoyed the portrayal of enduring friendship in all its ugliness and glory. The writing is clean and uncluttered, and Howe and Newman obviously work well as a team. There are no pauses or breaks where you feel you’re being handed from one to the other.

Howe is English, but he seems to ‘get’ something about American culture that he translates onto the page in all his work, and this book is no exception. It’s all written tongue-in-cheek but actually the fanatical zealots are pretty scary and well thought out and there are some pretty deep moments between our motley crew.

It’s horror I think, and it’s full of gore and pulse racing moments. It’s also got clever unexpected twists and turns that you won’t see coming and it’s heavy on nostalgia which I love. Go grab a copy. I mean, heavy metal, deranged cult, wrestling: what’s not to love…