You are here: Home / Reading / Review of ‘The Killer You Know’ by S R Masters 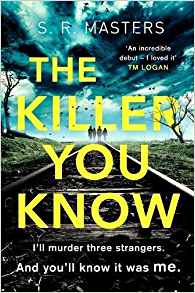 This book was so fun and so heavy in nostalgia that it made me long for the 90s. It has that old-style feel to it, think ‘Stranger Things’ or ‘Stand by Me’ – a group of five friends and a summer that ended in tragedy but with an original modern spin.

Our protagonist Adeline is now a pod show host and pretty successful. The storyline follows Adeline in 2015 – when four of the five teenage friends reunite and back in 1998 when things first went horribly wrong.

At its heart it’s an old unsolved mystery, wrapped in a new modern-day mystery which is actually a hangover from the first. But, it’s also about friendship groups, dynamics, and how the past looks different through the lens of today. It’s a great portrayal of teenage boredom and the high emotion that seems to be exacerbated by that (and probably hormones too).

Masters writes his characters well though not all are sympathetic or likeable. Adeline in particular was well thought out, fully formed and, believable.

The book plays a lot with perception and how easily we are fooled by the people who charm us. It’s a page-turner for sure and an impressive debut. I can’t wait to read his next one and hope for an equally fab soundtrack.