You are here: Home / Reading / Review of The Roanoke Girls by Amy Engel 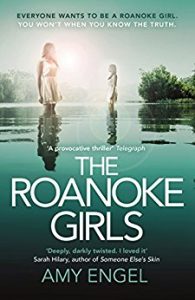 I liked Lane and I liked Allegra, the two central characters in this book. Interest in characters will always keep me reading, so I was hooked from page one. The writing and characterisation reminded me a lot of Gillian Flynn. It’s spiky, but easy and compelling, and this book also has a great southern American Gothic feel.

I did, however, figure out what ‘was going on’ before the reveal, which actually came pretty early and maybe wasn’t a ‘secret’ as such. For those who haven’t read it I don’t think saying it deals with familial abuse, in various guises, to be a spoiler.

‘The Roanoke Girls’ seems to be getting mixed reviews, perhaps because it deals with a pretty taboo topic. It worked for me though. I actually thought that one of the most interesting aspects of ‘The Roanoke Girls’ was that it looked, in a different way, at the effect this kind of abuse can have on victims. Allegra and some of her predecessors, are almost complicit in their own destruction, and actually this is a reported, if disturbing, phenomena amongst survivors.

It also explores the type of relationships the victims go on to have, or not be able to have, in the case of Lane and her mother, as a result of their pasts.

The abusers in this book are made all the more sinister by the fact that they don’t think they’re doing anything wrong. The family is made up of, and surrounded by, people willing to turn a blind eye, blame victims, and cover other people’s tracks. They make the crimes possible. So it’s also a book about what it takes to hide wretched family secrets and how much guilt is shared.

‘The Roanoke Girls’ is now available in paperback.