You are here: Home / Writing / Three years of CrimeFest! From pitch to panel 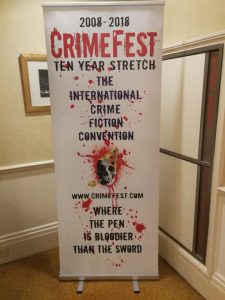 Last weekend was CrimeFest in lovely Bristol. The sun shone, and I had loads of fun. This is my third CrimeFest and honestly, it’s been a bit of a journey. 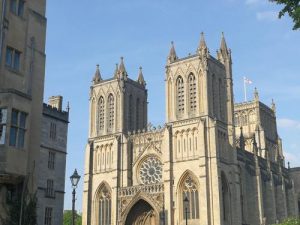 I went armed with what I thought was a finished manuscript (ha ha at 2016 me) that needed a little polishing but was almost good-to-go. It was my first convention and I was pretty overwhelmed by everything –  for starters that writers were wandering around like normal people. I was star-struck.

That first CrimeFest was a turning point for me. I’d spent a year-and-a-half writing my book (read about it here) and what I wanted to find out is if it was any good. This didn’t necessarily mean ready for publication. I’d read a lot at this point saying it might be your second, third, or fourth book that made it and I wasn’t certain it would be this one. I just wanted to know whether I could write well enough to consider it a goal.

I took part in Pitch An Agent. I didn’t get snapped up by any of them. BUT I got really warm, lovely feedback. All three of them liked my main character (Madison Attallee), they all thought the book had something but needed some work (it really did – see previous comment re ‘finished’) and when I asked outright – because what did I have to lose – whether I should pursue writing as a serious career I got three emphatic yesses. So, it gave me the push to send out to agents, which I did (read about my route to publication here). I met another writer doing Pitch An Agent, Victoria Selman, whose debut ‘Blood for Blood’ comes out in February 2019 (yay us Victoria). We have since become friends and – to anyone starting out – it’s these friendships with other writers that will keep you sane whilst plodding the path towards publication and beyond. Taking part in this also gave me the added bonus of having to polish the first few thousand words, condense my book into a couple of sentences (the pitch) and write a synopsis – all three agents agreed my synopsis was pretty bad (true story) so I re-wrote that as well.

I had a deal! I had a deal! With Orion. Excitement levels are insane, I’ve dragged my husband who doesn’t read, and I whisper loudly to him who everyone is, he doesn’t care. I’m still star-struck; I still don’t speak to anyone I recognise from book jackets. But, sitting-in on the panels this time was different. I was beaming like a fool, thinking next year I’ll have a book out in the world. I only made an overnight for this one, but I also met up with Elle Croft author of the brilliant ‘The Guilty Wife’ who has since become a firm writing buddy. We have the same editor, similar tastes, and a shared warped sense of humour. 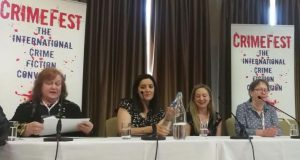 Which leads me on to this year… I did my first panel. It was amazing and, honestly I was shitting-it beforehand. The authors on the panel – Jane Casey, Zoë Sharp, Christine Poulson, and moderator Sharan Newman – were super kind, very engaging, and made it an absolute breeze. Next time I won’t be so scared.

I was able to thank some of the bloggers who’d given ‘I, Witness’ such lovely reviews.  I got a photo with Martina Cole – I want to tell you I was cool and calm about this, but it would not be the truth. I spent time with other writers, a lot of whom I have now met both online and in real life.  I got to hang out with my book twin (same publication day) Robert Scragg – author of ‘What Falls Between the Cracks’. And had lunch in the prettiest restaurant (Elle says most Instagram-able – I nod as though I get this) with brilliant and inspiring authors Phoebe Morgan and Emma Kavanagh.

I suppose it’s networking, but it’s also a great way of supporting each other. It was good to catch-up, learn loads and share the joy of things like launches and covers, as well as fears like writing book two (a blog post in itself which I will do once the bugger is finally done). Also lots of LOLs at the bar. I cannot stress how much these relationships have helped and how necessary it has been for me to make some writing friends. We are all at home tapping away, most of us with other jobs, or families or both, so conventions, it turns out, are an excellent way to connect.

From walking in, very scared to ‘pitch’ three years ago to now has bought about a lot of changes. The best one being that my book was there! In the Waterstones at CrimeFest.

I left feeling full of gratitude, excited to be at the start of my writing career and pleased to find myself in such brilliant company.

Next in the calendar is Harrogate and I’m hoping the sun shines there for us too!