You are here: Home / Writing / Writing about dysfunctional families 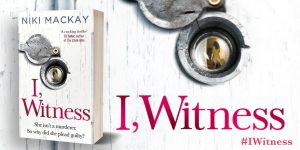 I’m really loving the messages, tweets and emails I’m getting in response to ‘I, Witness’. It’s totally terrifying putting a book out there but when people read it, and connect with it, it’s very satisfying. A lot of the messages have mentioned the dysfunctional family themes and I’ve been asked about it at a couple of book-groups recently too, so I thought maybe I’d get down a few thoughts on that.

I’m going to start by saying I’m honestly not 100% convinced there is such a thing as a ‘normal’ family any more than there is any such thing as a ‘normal’ person. We are all different. Dynamics between people and personalities are never a set thing. However, there are probably varying degrees of ‘wellness’ ranging from ‘really messed-up’ to ‘have their moments but pretty healthy’.

The people I write about definitely fall into the ‘really messed-up’ category. I’ve had one comment suggesting that they were unbelievably so. But here’s the thing. I reckon I’ve encountered most of these people and their situations in real life. And also, who wants to read about the healthy, happy person who made all the right decisions? Well, someone likely does, and I also bet there’s a different type of writer to me portraying them beautifully. But I doubt they’ll be my readership. In my (admittedly unusual) life I’ve encountered a few things. Homophobia, and racism were pretty standard themes throughout my childhood. As was poverty, education, success, and inspiration. Growing-up I lived on a council estate then in a housing association house and, by the time I hit my teens, my mum had gone to university and became a homeowner.

I’ve had my own moments with depression, and all the other things that go with it. For me that can include, anxiety, hopelessness, periods of intense self-sabotage and destruction. I’ve also been lucky to have great friends, I’ve travelled a lot, studied to Masters level despite leaving school with only two GCSEs, been homeless, and been a single parent. Now I’m a married homeowner, have two lovely kids, and I do my dream job. Life is vast and changeable, and no matter what it throws at you, I believe you always have the chance to change it. I’m a worrier no doubt, but I’m also an eternal optimist at heart which stands me in good stead when things don’t go entirely my way!

All of my life experiences, and the fantastic array of people I’m lucky to know, is where my characters originate. My main protagonist, private investigator, Madison Attallee has had a bumpy ride, and she’s full of contradictions. She can be difficult, self-pitying, self-destructive, and downright rude. She’s also whip-smart, full of compassion, and softer on the inside that you might think.

In ‘I, Witness’ the women who narrate the story are all struggling with their own issues. They are trapped by circumstance, by their own inadequacies, and by the views and actions of others. There are ongoing themes about identity and motherhood, domestic violence, and psychological abuse. As in life, some of my characters overcome some of these issues, some don’t.

You can buy ‘I, Witness’ here. I’d love to hear how my fictional messed-up families compare to yours!